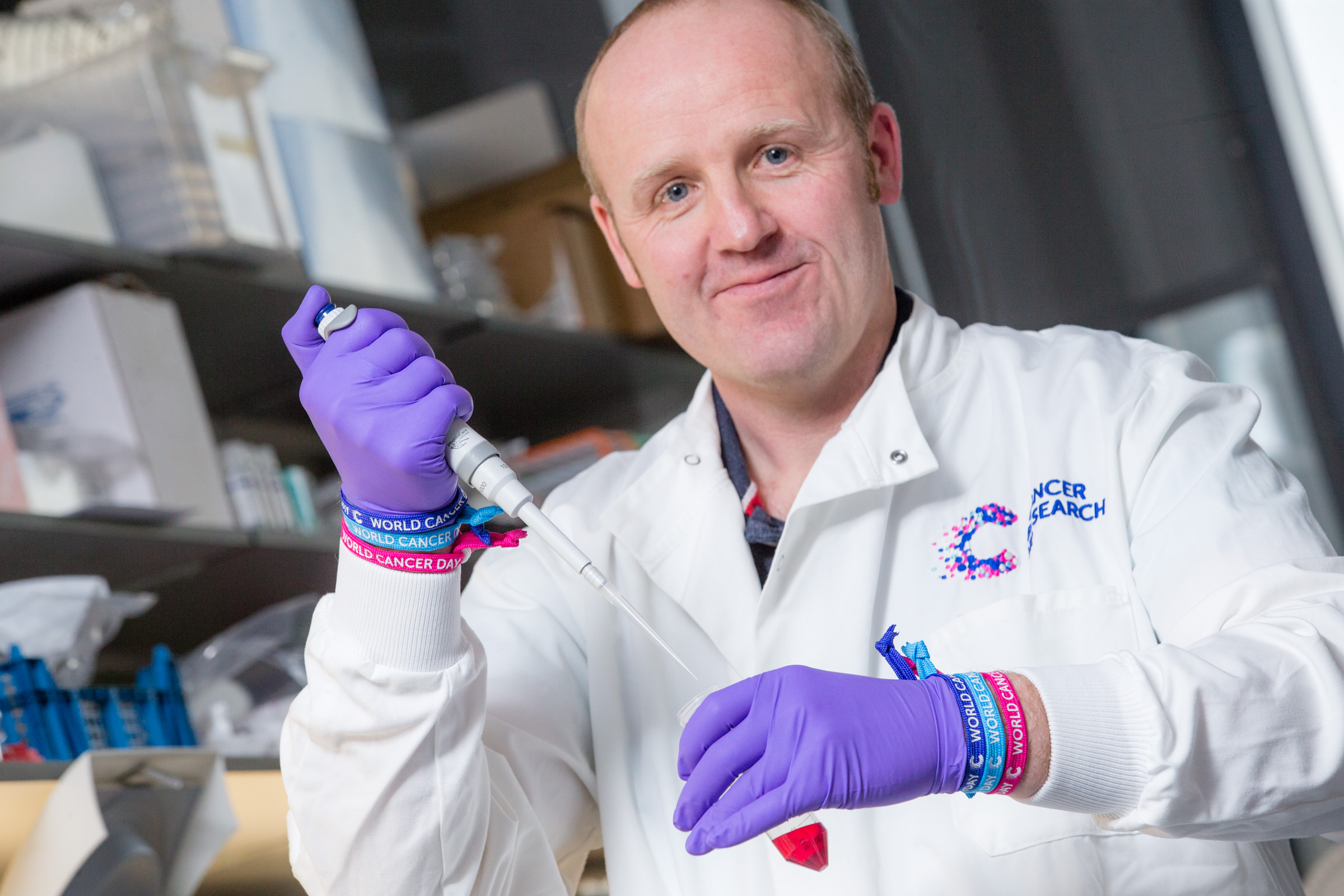 When Dr Mike Gill’s dad was diagnosed with incurable lung cancer, it was a life changing moment for both of them.

For his dad, Barry Gill, it was a reason to start living again. Barry had shut himself away after losing his wife of 37 years. The former Merchant Navy officer and rigger took up old hobbies and started seeing his friends. He died within 18 months of his diagnosis at the age of 66.

For Mike, it was the motivation to switch from a career in virus research to one in cancer. Frustrated by the lack of treatment options available to his dad, he decided to move to the Cancer Research UK Cambridge Institute to answer some of the questions he had.

Late last year, he was part of a team awarded a Cancer Research UK Pioneer Award. These awards support the development of innovative, higher risk ideas that could revolutionise our understanding of cancer.

A Unity Band is a wristband which symbolises solidarity with people affected by cancer.

It can be worn in memory of a loved one, to celebrate people who’ve overcome cancer or in support of those going through treatment.

This powerful accessory in the fight against the disease, raises money through donations to help fund crucial cancer research.

Mike, who’s originally from Middlesbrough and now calls Cambridge home, knows how important fundraising is. His work is supported by Cancer Research UK; the charity receives no government funding and relies on vital donations from the public.

And on a difficult day in the lab, it’s remembering his dad that gives him the motivation to keep going.

Mike said: “For me, as a scientist, I found it very frustrating to hear how there was nothing that could be done for my dad. His cancer had come back and radiotherapy didn’t help him second time round. They said the only option was palliative care. You’re thinking – there has to be something we can do, there has to be things we can try, radical things maybe, something they haven’t tried before.

“That’s what we’re trying to do now with the Pioneer Award. I am working with Dr Martin Miller on trying to unpick the complexities of the tumour and its environment, to show how the different cells interact. If we can understand this, then we can start to target them. I know it’s only because of fundraising that I am able to do this work.” 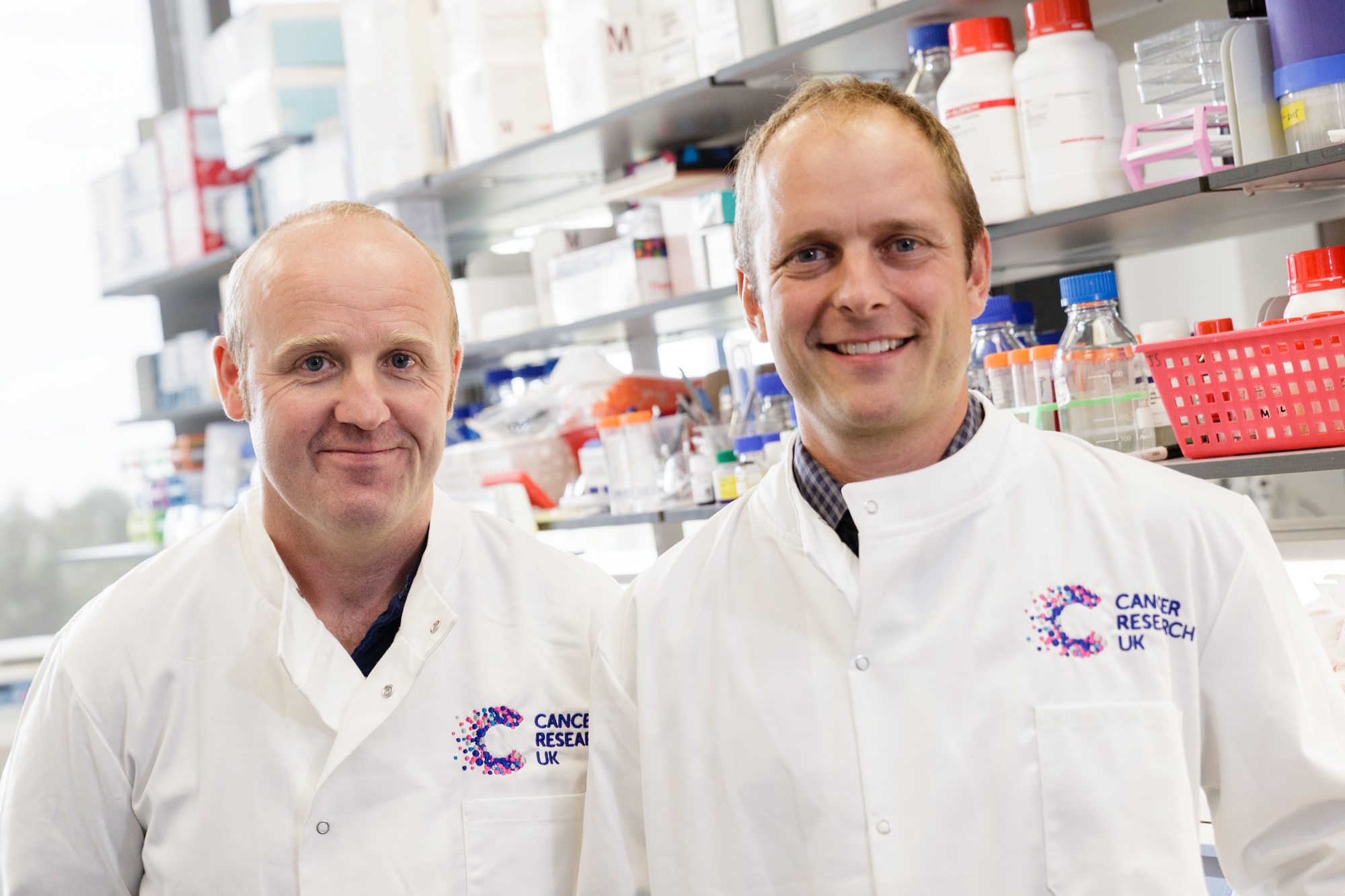 Mike had been researching herpes viruses before his dad’s diagnosis. It was a job he enjoyed but seeing the impact of cancer first hand motivated him to change roles.

Mike said: “My dad had a cough that wouldn’t go. His symptoms were there but he didn’t listen to them. My sister made him go to the doctors. They sent him for x-rays straight away. The cancer was so extensive that his lung looked white on the x-ray.

“It woke him up, he had been very depressed after losing my mam. The diagnosis got him back to his old self. He started getting out with his friends and back into his old hobby of pigeon racing. He used to love pigeon racing, I’d go with him to the lofts when I was younger. He stopped after losing our mam. When he got back into it, he spent all day with those pigeons, it was his passion. It was nice to see him living again.

Barry Gill with his racing pigeons.jpeg 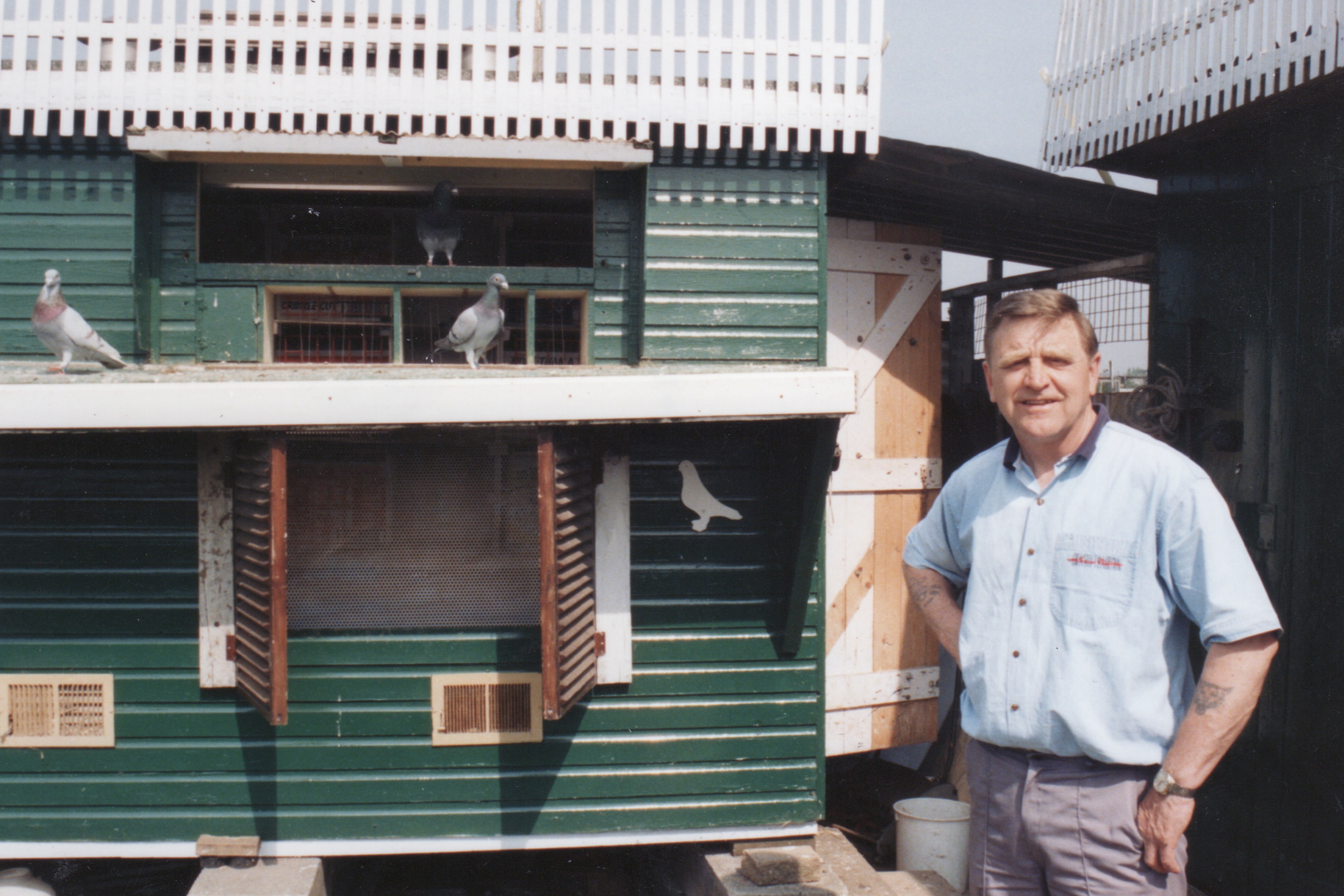 “The cancer came back within a year. He never moaned about it but you could see him deteriorate. My sister Mandy was amazing, she looked after him really well. His brother and sisters were really supportive too.”

Mike rarely takes time off and is determined to make progress but it can be a lengthy and challenging process. On a difficult day in the labs, it’s his dad he will think about.

Mike said: “It never leaves you, you move on and try to have fun and a good life but there is no part of you that can ever really forget what you went through. It’s my incentive now, thinking of my dad.

“There are lots of challenges in research, it’s very complicated, it’s not just about the cancer but about the cells around and inside of the tumour. It helps having a personal motivation. It can be demoralising when experiments don’t work out but when you have that inner stubbornness and determination, it gives you the drive to keep going.”

Dr Mike Gill in the lab.jpg 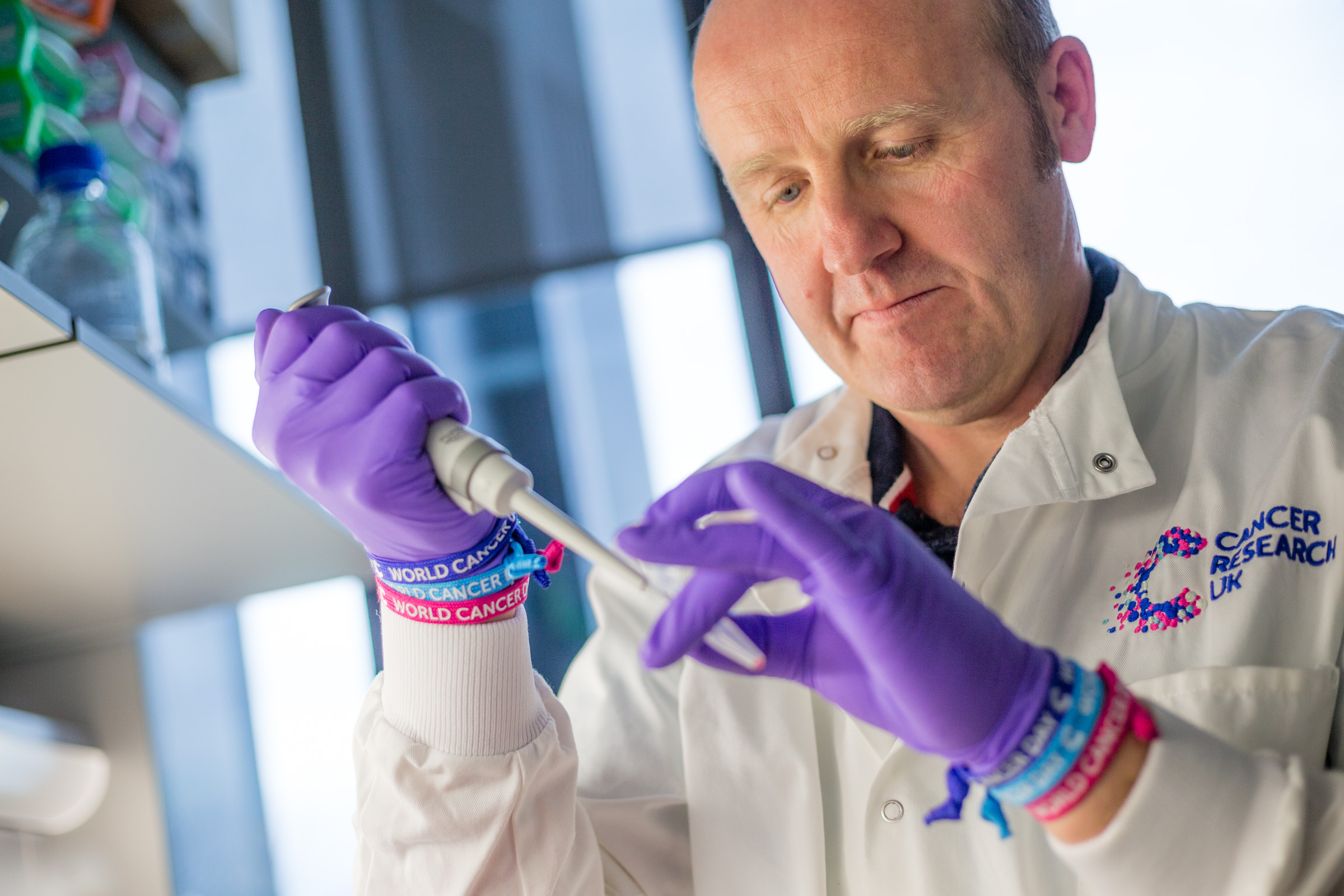 Thanks to research, more people are surviving the disease than ever before. Survival has doubled in the last 40 years in the UK and Cancer Research UK’s work has been at the heart of that progress.

But the charity needs everyone to act right now to help speed up advances which will help people spend more precious time with their loved ones.

Danielle Glavin, Cancer Research UK spokesperson for Cambridge, said: “Banding together on World Cancer Day is a unique way for people in Cambridge to unite with the researchers like Mike and cancer patients around the world. It’s a chance to show that together, we will beat cancer.

“One in two people born after 1960 in the UK will be diagnosed with the disease at some point in their lifetime, so we need as many people as possible to help back our doctors, scientists and nurses on the frontline against cancer.

“Wearing a Unity Band is a simple, easy way to raise vital funds, accelerate progress and save more lives. Small actions can make a big difference.”

Unity Bands are available for a suggested donation of £2 from all Cancer Research UK shops and online at cruk.org/worldcancerday