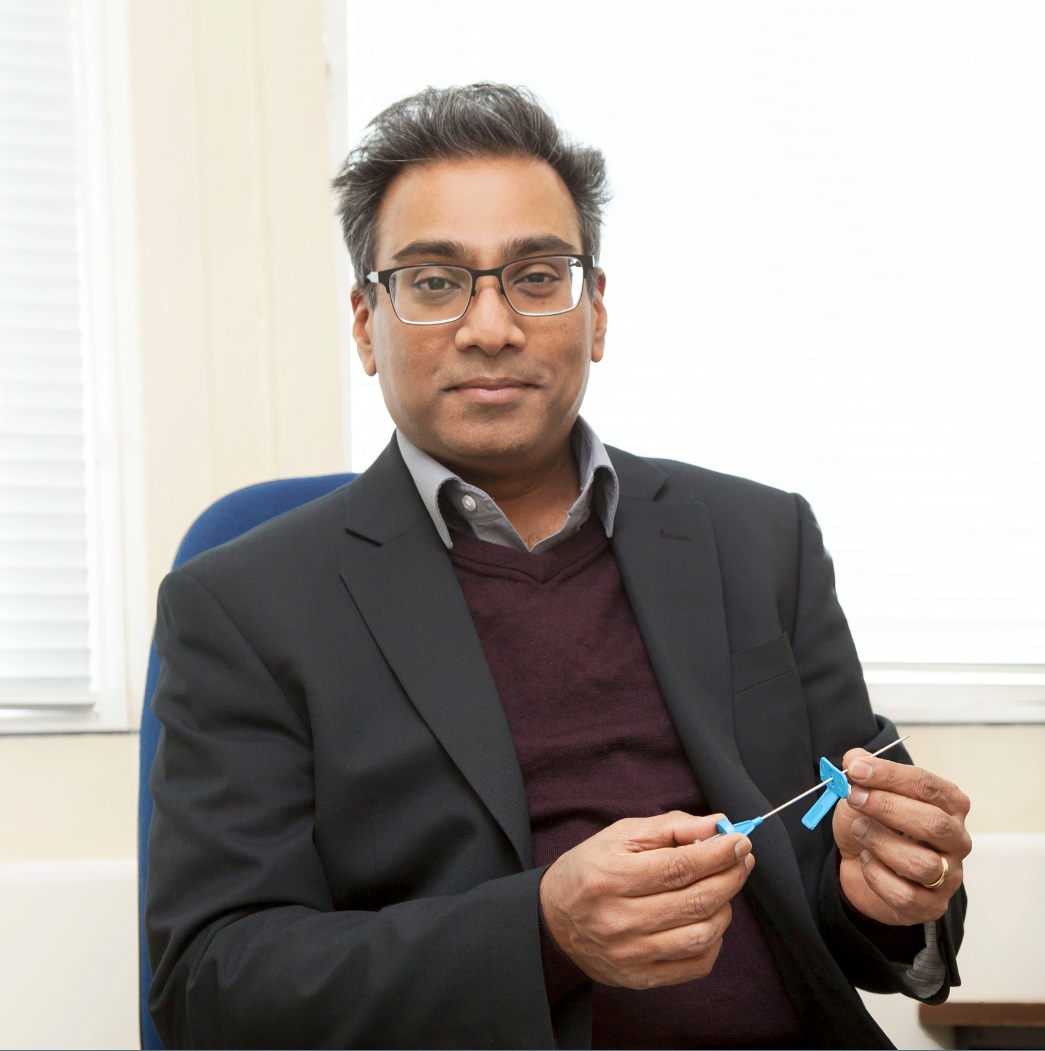 A device developed by a Cambridge researcher to make prostate biopsies safer has begun clinical trials.

University of Cambridge and Cambridge University Hospitals (CUH) researcher and urologist, Mr Vincent Gnanapragasam, first developed the CamProbe as a prototype to take safer prostate biopsies in 2016. A major government grant enabled further development into a low-cost disposable device that can be used in any hospital outpatient clinic.

Prostate cancer is the most common cancer in men in the UK; in 2015, nearly 48,000 men were diagnosed with the disease.

The current method to retrieve samples from the prostate uses a transrectal ultrasound probe inserted into the back passage to allow the biopsy to be taken. Patients who undergo this procedure are at risk of urinary infections or sepsis as the needle has to pass through the bowel wall to reach the prostate. Around 30-40,000 prostate biopsies are done every year using this method in the UK alone.

The CamProbe has been designed so the biopsies can be taken more safely through the skin under the scrotum (transperineal) and avoiding the bowel. Mr Gnanapragasam, who also co-leads the Cancer Research UK Cambridge Centre Urological Malignancies Programme said: “The design of the CamProbe is a needle within a needle and allows us to collect tissue from the prostate through a more sterile part of the body. Most importantly it can be done under local anaesthetic in the outpatient department. Previously this kind of approach was only possible if a general anaesthetic was used with very significant additional costs.

“The first CamProbe prototype, built in our engineering department, showed that we could reduce infections and sepsis to zero compared to rates of up to 12% with the current transrectal biopsy method. Now with this trial we will be testing the new and improved disposable version to ensure it performs just as well.”

The trial for the CamProbe is now underway using funding from the National Institute for Health Research (NIHR). It will run for a year at several hospitals around the UK including at the Cambridge Clinical Research Centre.

If the trial is successful, the CamProbe could be adopted into mainstream use within two years. Mr Gnanapragasam added: “We’re very excited clinical trials with our improved device are now underway. Our goal is to show that the CamProbe is a simple alternative for taking prostate biopsies which eliminates infection risks to patients and drastically reduces the need for antibiotics.

“The CampProbe’s simplicity also means it will be a low-cost device, and, in addition to reducing infections, the need for antibiotics and sepsis related admissions, could potentially save the NHS an estimated £7-11 million pounds every year. This will free up money for other healthcare needs.”