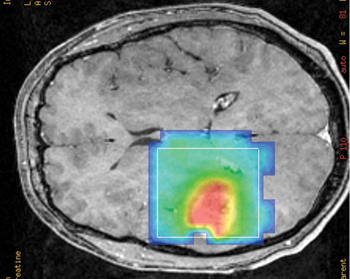 Scientists are making strides in developing liquid biopsies for brain tumours by detecting tumour DNA in the fluid from around the brain and spine.

Liquid biopsies are fluid samples from patients, for example from the blood or urine, which provide a less invasive way to monitor disease compared to tumour biopsies. A less intrusive test could be hugely beneficial for brain tumours where collecting samples can be difficult and risky for patients.

Scientists at the Cancer Research UK Cambridge Institute analysed cerebrospinal fluid (CSF) – which bathes the brain and spinal cord – in 13 patients with a type of brain tumour called a glioma. They detected tumour DNA in five (39%) of the patients and their findings are published in EMBO Molecular Medicine.

Researchers used a cheap and widely available technique called shallow whole-genome sequencing to detect brain tumour DNA – they looked for large genetic changes, such as genes being duplicated or lost.

For the first time, the researchers identified tumour DNA in the CSF by looking at the size of the DNA fragments, which are shorter than those from healthy cells. This provides another way to detect brain tumour DNA, potentially increasing the detection rate.

In one patient, multiple tissue samples from their brain tumour were compared to their CSF. The genetic changes broadly matched, but the CSF contained changes that were missed in some of the tissue samples, suggesting that CSF samples could reflect the repertoire of genetic alterations found in brain tumours.

Dr Florent Mouliere, co-first author, who conducted the work as a scientist at the Cancer Research UK Cambridge Institute, said: “Liquid biopsies are showing great promise for a number of cancer types, but tests for brain tumours have lagged behind due to the low levels of tumour DNA found in body fluids, in particular the blood.

“Our work shows that a cheap, easily available technique can be used to analyse tumour DNA in cerebrospinal fluid. In the future, we envisage that this technique could be used to identify patients who may benefit from further tests that could help monitor their disease, opening up more tailored treatment approaches.”

Around 11,400 people are diagnosed with brain tumours in the UK every year and only 14% of people will survive their disease for a decade or more. That’s why Cancer Research UK has made brain tumour research one of its priorities, spending around £25 million over the next five years.

Professor Charles Swanton, Cancer Research UK’s Chief Clinician, said: “Survival for brain tumours remains low and there is an urgent need for research like this to identify strategies to better manage these complex diseases. This study lays important groundwork that brings the possibility of liquid biopsies for this hard to treat disease one step closer.

“The researchers will now need to expand this work into larger numbers of patients and find out whether this approach could have applications in the clinic, such as indicating whether a patient’s treatment is working.”