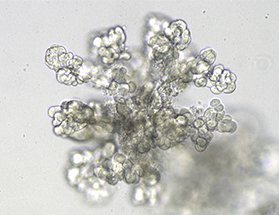 Cambridge researchers have created ‘mini liver tumours’ in a dish for the first time, which can be used for testing new cancer drugs.

Cambridge scientists have created mini biological models of human primary liver cancers, known as organoids, in the lab for the first time. In a paper published today in Nature Medicine, the tiny laboratory models of tumours were used to identify a new drug that could potentially treat certain types of liver cancer.

Primary liver cancer is the second most lethal cancer worldwide. To better understand the biology of the disease and develop potential treatments, researchers need models that they can grow in the lab and that accurately reflect how the tumours behave in patients. Previously, cultures of cells had been used but these are hard to maintain and fail to recreate the 3D structure and tissue architecture of human liver tumours.

The researchers created the mini tumours (up to 0.5mm) – termed tumouroids – to mimic the three most common forms of primary liver cancer. Tumour cells were surgically removed from eight liver cancer patients and grown in a solution containing specific nutrients and substances which prevent healthy cells out-competing the tumour cells.

The team, from the Wellcome/Cancer Research UK Gurdon Institute in Cambridge, used the tumouroids to test the efficacy of 29 different drugs, including those currently used in treatment and drugs in development. One compound, a type of protein inhibitor, was found to inhibit the activation of a protein called ERK in two of the three types of tumouroids, a crucial step in the development of liver cancer.

The researchers then tested this compound in vivo, transplanting two types of tumouroids into mice and treating them with the drug. A marked reduction in tumour growth was seen in mice treated with the drug, identifying a potential novel treatment for some types of primary liver cancer.

The tumouroids were able to preserve tissue structure as well as the gene expression patterns of the original human tumours from which they were derived. The individual subtypes of three different types of liver cancer, as well as the different tumour tissues which they came from, were all still distinguishable even after they had been grown in a dish for a long time. As the tumouroids retain the biological features of their parent tumour, they could play an important role in developing personalised medicine for patients.

The creation of biologically accurate models of tumours will also reduce the number of animals needed in certain experiments. Animal studies will still be required to validate findings, but the tumouroids will allow scientists to explore key questions about the biology of liver cancer in cultures rather than mice.

Lead researcher Dr Meritxell Huch, a Wellcome Sir Henry Dale Fellow from the Gurdon Institute, said: “We had previously created organoids from healthy liver tissue, but the creation of liver tumouroids is a big step forward for cancer research. They will allow us to understand much more about the biology of liver cancer and, with further work, could be used to test drugs for individual patients to create personalised treatment plans.”

Dr Meri Huch describes her pioneering work on liver organoids and the mechanism of liver regeneration after damage.

Dr Andrew Chisholm, Head of Cellular and Developmental Sciences at Wellcome said: “This work shows the power of organoid cultures to model human cancers. It is impressive to see just how well the organoids are able to mimic the biology of different liver tumour types, giving researchers a new way of investigating this disease. These models are vital for the next generation of cancer research, and should allow scientists to minimise the numbers of animals used in research.”

Dr Vicky Robinson, Chief Executive of the NC3Rs which partially funded the work, said: “We are pleased to see that the funds from our annual 3Rs prize, sponsored by GlaxoSmithKline, have furthered Dr Huch's research. Each year the prize recognises exceptional science which furthers the 3Rs, and the work being conducted by Meri and her team is continuing to make progress in this area. This new breakthrough involving liver cancer organoids has the potential to reduce the number of animals required in the early stages of liver cancer research, and provide more biologically accurate models of human tumours."

This work was funded by a National Centre for the Replacement, Refinement and Reduction of Animals in Research (NC3Rs) research prize, Wellcome and Cancer Research UK Cambridge Centre.