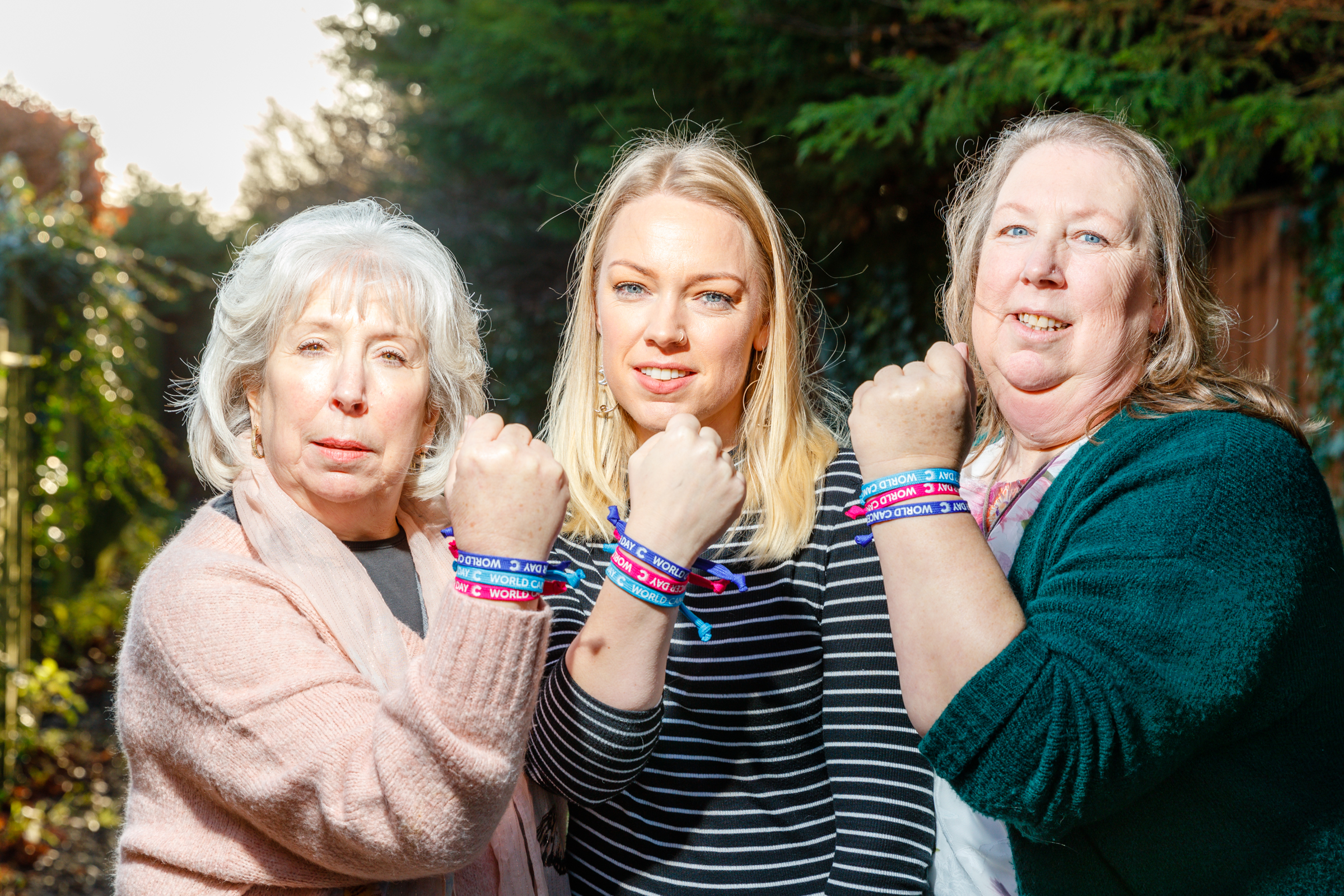 The women are backing Cancer Research UK’s campaign for World Cancer Day and urging everyone to join them by wearing the charity’s Unity Band on February 4.

Sisters Debbie Cross (64) and Gail Ashman (66) were both struck down by breast cancer 25 years apart and now Debbie’s daughter, Rebecca (37), has recently discovered she has also inherited the faulty gene. They talk about their experience in this film:

They are wearing the brightly coloured wristbands to show solidarity with other people diagnosed with cancer. 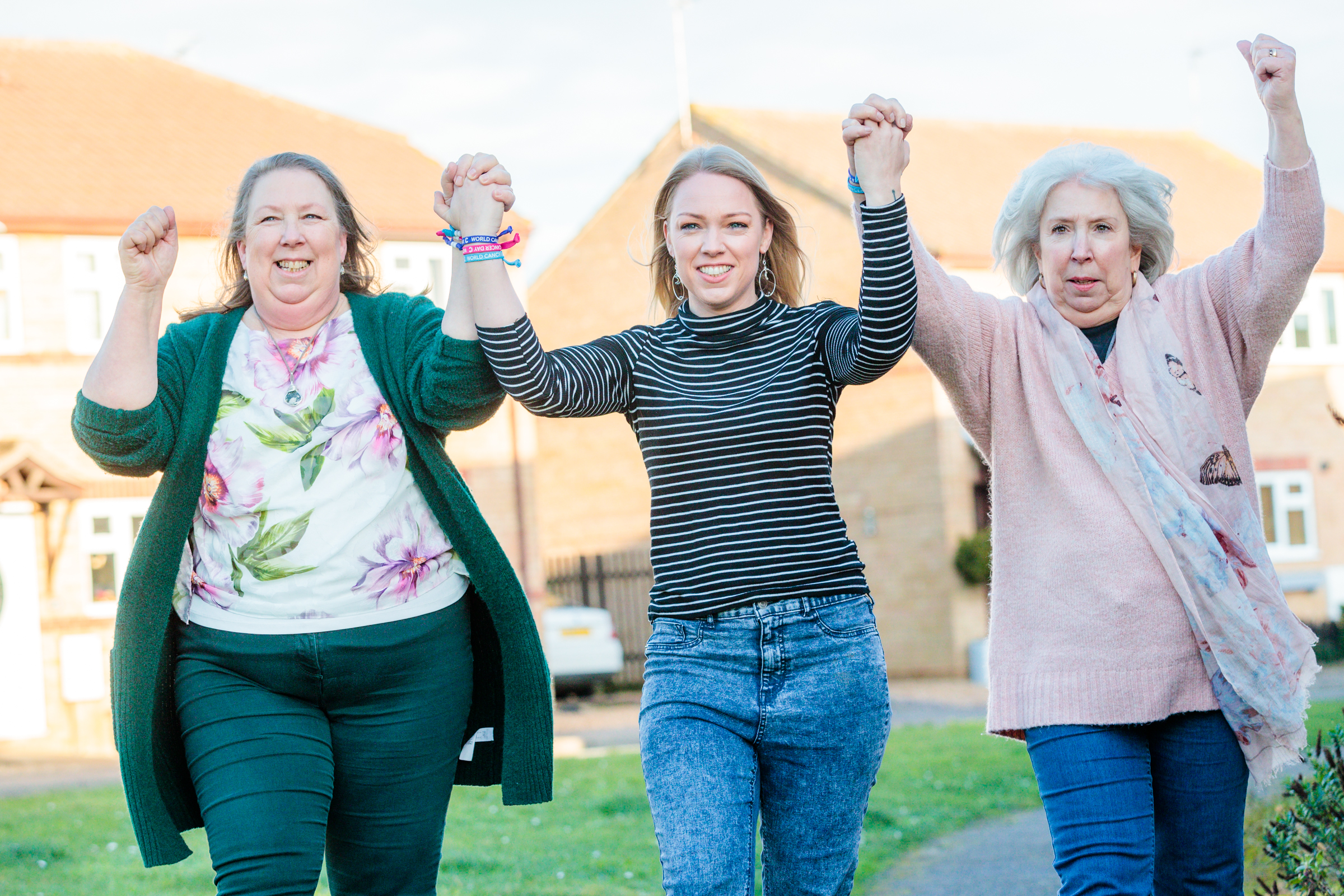 The Unity Band is available in three different colours – pink, navy and blue. It can be worn in memory of a loved one, to celebrate people who’ve overcome cancer or in support of those going through treatment.

Every hour, 4 people are diagnosed with cancer in the East of England.

By making a donation for a Unity Band, people across the region will be raising money for life-saving research which will help people like Debbie, Gail and Rebecca.

The women have a genetic mutation of the BRCA1 gene that increases their risk of breast and ovarian cancer - a risk shared by the Hollywood actress Angelina Jolie who revealed she carried the faulty gene in 2013. Up to 60 per cent of women who carry a BRCA1 mutation will develop ovarian cancer in their lifetime, compared to just two per cent of the general population, and up to 90 per cent will develop breast cancer.

Debbie, who retired as an IT Administrator earlier this year, was treated at Addenbrooke’s Hospital in Cambridge where she took part in the Personalised Breast Cancer Programme, which aims to improve early diagnosis and tailor treatment.

The family were devasted to discover they were BRCA1 mutation carriers when in October 2016 Debbie discovered a lump on her left breast. She was fast-tracked to Addenbrooke’s and diagnosed with triple negative breast cancer.

She said: “It all happened so quickly. I didn’t tell anyone I had a lump as I just thought I must get on with this, but when I got home knowing that I had cancer the reality of my diagnosis hit me, and I knew that my life would never be the same.”

Just as Debbie was trying to come to terms with her own diagnosis, she was hit with the further devasting news that doctors had discovered she was carrying the BRCA1 gene fault and her family could also have an increased risk of getting cancer.

“Being told you have breast cancer is a lot to take in, but I also had to tell my family that they might also be carrying the gene and that was the hardest part. It was the worst day of my life when I had to sit my daughter down and tell her she needed to be tested. The only thing that kept me going is knowing cancer treatment has evolved so much in the past 25 years since my sister Gail was treated and survival rates have improved so much.”

She added: “My mother, Iris, died from ovarian cancer in 1994 but none of us knew at the time that we all had an increased risk of getting cancer and were carrying the faulty gene.”

Debbie’s sister, Gail, who only found out she was also carrying the same gene mutation after Debbie told her to get herself retested, supported Debbie through gruelling chemotherapy, a double mastectomy, radiotherapy and further surgery.

She said: “When I had breast cancer things were very different to how they are now. There was no specialist care like the Personalised Breast Cancer Programme and the outlook was not as good as it is today. I had a double mastectomy and radiotherapy so I knew what Debbie was going through. I talked with my sister about our treatment and we stayed positive, it was something as a family we had to get through together.”

Now the two sisters are supporting Debbie’s daughter, Rebecca, who has opted for a double mastectomy after discovering she also carries the faulty BRCA1 gene.

Rebecca said: “As a family we have been through so much but it has also brought us closer and we are there to support each other. Knowing what my mum and aunt have been through has helped me make some difficult choices and it has also helped me put things into perspective. My whole family and friends have been very supportive and helped me enormously. This is not about me having cancer, it’s about making informed decisions with the most up-to-date information.

“When I heard there was a high chance that I will get cancer I knew I had to do something about it.  A lot of people are not told about their cancer risk, but because of my family history I was given the facts. For me it’s about prevention and not assuming the worst. Surgery is something positive that I can do, and for that, I am grateful.

The Personalised Breast Cancer Programme is a pioneering study based on research from the Cancer Research UK Cambridge Centre at the University of Cambridge, which reads DNA and RNA information like a barcode to tailor treatment for breast cancer patients. Discovering which genetic mutations are causing each patient's breast cancer enables doctors to choose the best treatment - in Debbie's case this was a trial called PARTNER where a new targeted cancer drug was given to her in conjunction with her chemotherapy.

Following a successful pilot study of 250 patients funded by Addenbrooke’s Charitable Trust, additional funding from Cancer Research UK and The Mark Foundation for Cancer Research, means that a further 2,000 patients will have genetic barcoding of their tumour to identify which genetic mutations are causing their cancer and determine the best possible treatment for each individual patient.

Dr Jean Abraham, co-lead of the Personalised Breast Cancer Programme (PBCP), said: “The treatment of breast cancer has evolved over the last two decades. We know that breast cancer is not one single disease but there are at least 11 sub-types. The PBCP has demonstrated that the majority of women in the pilot had genetic information which influenced their clinical management. Alongside PBCP we need to have innovative clinical trials such as the PARTNER trial, funded by Cancer Research UK and AstraZeneca, for triple negative breast cancer patients and for breast cancer patients like Debbie who are carriers of high-risk genes.”

Debbie, who was one of the first patients to take part in the trial, added: “I thought maybe it would help someone else if I took part in the trials, so I really wanted to do it. I have seen how much cancer has impacted me and my family. I had chemotherapy, radiotherapy, a double mastectomy and preventative surgery but I’m now living a full and healthy life and I’m here to support my daughter.

“Thanks to Cancer Research UK my family has benefited from vital research.  I know my tissue has been studied and hopefully it will help future generations. No one should have to go through the ordeal of being diagnosed with cancer.

“I want everyone to show their support on World Cancer Day and help Cancer Research UK to tackle this devastating disease. Just by wearing a Unity Band we can all make a real difference to people with cancer.” 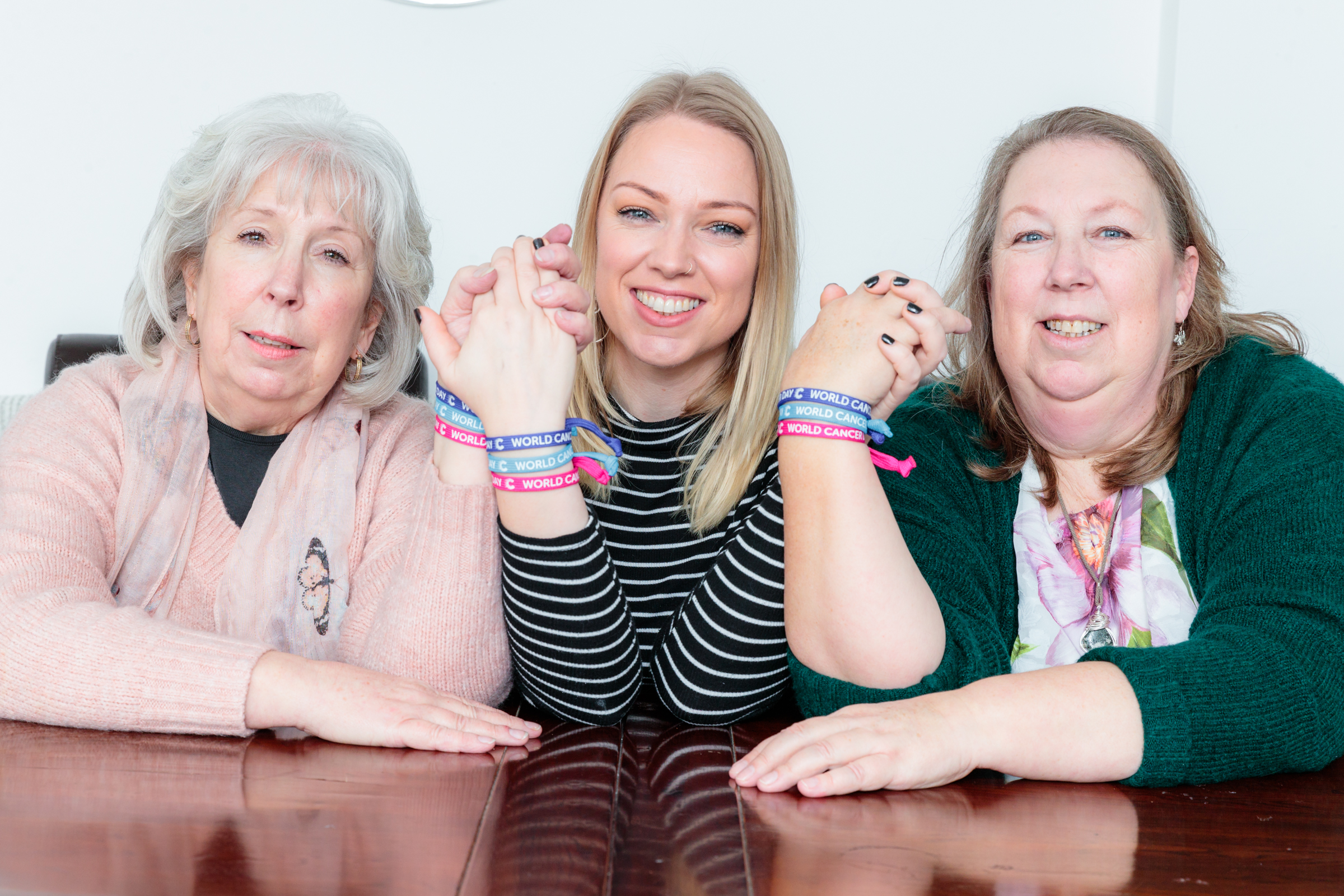 World Cancer Day is an international movement, uniting people around the world on 4 February to beat cancer.

In the UK, one in two people will be diagnosed with the disease at some point in their lifetime.

The good news is, thanks to research, more people are surviving than ever before. Survival has doubled in the last 40 years in the UK and Cancer Research UK’s work has been at the heart of that progress.

But there is still so much more work to do. That’s why this World Cancer Day, the charity is calling on everyone to raise money to help accelerate progress and save more lives.

Patrick Keely, Cancer Research UK spokesperson for the East of England, said: “We are very grateful to Debbie, Gail and Rebecca for their support and showing how important it is for everyone to wear a Unity Band on World Cancer Day.

“Our research has played a role in developing 8 of the world’s top 10 cancer drugs and we’re working every day to find new ways to prevent, diagnose and treat the disease. But we can’t do it alone.

“By making a donation of just £2 for a Unity Band, people in the East of England will be funding world-class research to help more people survive. Together, we will beat cancer.”

To get a Unity Band and make a donation, visit a Cancer Research UK shop or go online at cruk.org/worldcancerday.